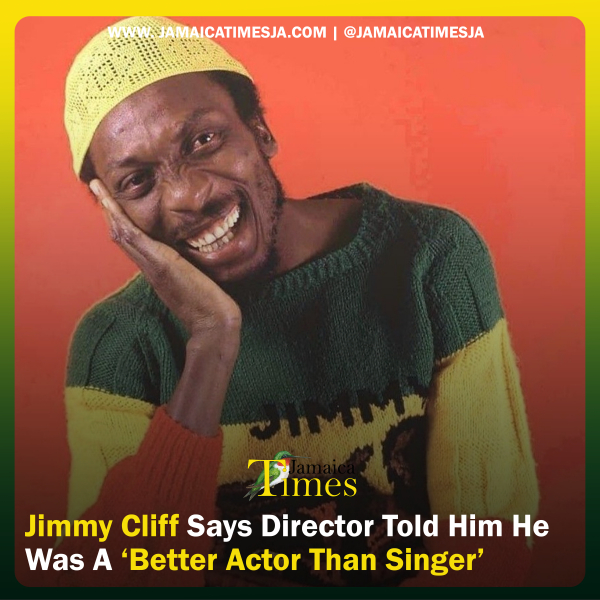 Reggae legend Jimmy Cliff is reflecting on The Harder They Come, as the film marks its 50th anniversary, and he has recalled that the director told him he was a better actor than he was a singer.

Cliff, now age 77, was speaking to British singer Estelle in a nearly hour-long interview with Essentials Radio for Apple Music.
According to the Reggae icon, it took a bit of convincing from director Perry Henzell, before he committed to playing the film’s lead role as Ivanhoe ‘Rhygin’ Martin—a youngster from rural Jamaica, hoping to become a recording artist in Kingston, but who fell on hard times and took up a life of crime, out of desperation.
“At the time, I resided in the UK, and the director, Perry Henzell, brought the script over to me and said he would like me to play in his film. So, we ran a scene, and he was very happy that he had found the person to do his film after all these years walking around with it,” he recalled.
“Well, it took a few things to make me say yeah because at the time, I was doing very well in Europe. I had hit records there. I was making good money. Well, one of the main things that made me agree to say yeah was the director said to me, ‘You know, Jimmy, I think you’re a better actor than singer.’ And my eyes popped open because I’ve always said that to myself, and nobody ever read my mind to say that. So, that really closed the deal for me,” Cliff added.
The Harder They Come was co-written by Jamaican film icon Trevor Rhone and part-funded by Chris Blackwell and Island Records as a means of promoting reggae outside of Jamaica, and considered one of, if not, the most influential Jamaican film and one of the most important films from the Caribbean.
Cliff noted that the film’s success was largely due to the level of confidence of every person who was part of its production.
In April, he signed with ICM Partners in an arrangement that will see the company marketing the film’s sequel.
During the interview, Cliff also pointed out that his hits on the soundtrack were based on his life.
“It’s an inspirational song,” he said of You Can Get It If You Really Want, which was released in 1970.  “It came to me at one of the moments in my life when I was motivating myself. Songwriting is like this for me at least. Some songs are autobiographical, in some songs you are describing a situation; that was an autobiographical song that I was inspiring myself.”

On Sitting in Limbo, released in 1971, Cliff explains: “Well, that was an autobiographical song at one moment in my life, when I was feeling kind of low and I had to uplift myself. Give myself, so to speak, hope, and that’s where that song’s coming from.”

Another of his songs on the album was Many Rivers to Cross and it similarly drew on times of turmoil, as he explained to Estelle.

“That song (Many Rivers To Cross) was a picture and the emotions of all different things that people go through in this life; as an African descendant man, I thought that was an essential part of the song; As people in general, people go through that, and I was thinking of all of those emotions packed into one,” he said.

Unlike his acting career, music was a no-brainer for Cliff. He revealed that as early as his post-toddler days, he recognized his niche for the industry—thanks to his family.

“My family, everyone sang. We were a singing family, and there was always music for everything. Music for dinner. Music for breakfast. Music for funerals. Jamaica is like that. So, yes, I grew up in a musical family. I sang in the church. There was music around all the time. So, yeah, at about age of six, I decided I want to do music… I sang folk songs, and I sang Calypso, and I sang what we call foreign songs, which is mainly American music. You know? Whether it be Sam Cooke, Fats Domino, Ray Charles, R&B, especially from New Orleans.”

The Harder They Come soundtrack was released in 1972 in the UK by Island Records and issued in February 1973 in North America as Mango Records.

In 2021, the album was deemed “culturally, historically, or aesthetically significant” by the Library of Congress and selected for preservation in the National Recording Registry.

Other Reggae icons who were part of the soundtrack were Toots and the Maytals, who had two songs, Pressure Drop and Sweet and Dandy; Desmond Dekker with Shanty Town, and The Melodians who recorded Rivers of Babylon; The Slickers with Johnny Too Bad and Scotty with Draw Your Brakes.