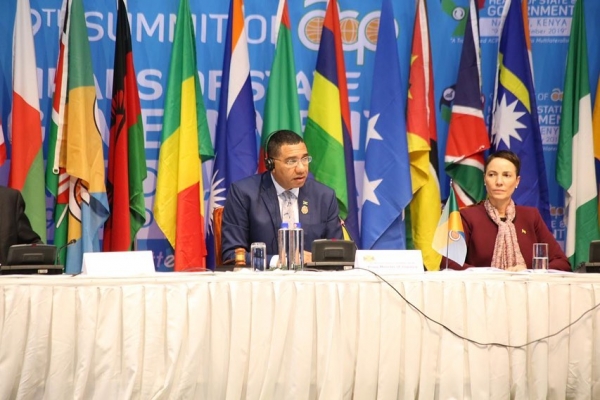 Prime Minister Andrew Holness says it is important for Governments to partner with the private sector to alleviate poverty in their countries.
The Prime Minister’s comment came while speaking at the 9th meeting of African, Caribbean, and Pacific (ACP) Heads of State and Government in Nairobi, Kenya.

Prime Minister Holness attended the ACP Summit and the precursor, the ACP Business Summit from December 8-10.

“In the conversation about the economy in cooperation and the new partnership with the private sector, [there] must be an understanding that we have to do more in dealing with poverty in our countries. And the work that I am seeing here is a perfect example of how businesses with good corporate social responsibility supported by Governments can have efficient private sectors,[and] efficient businesses making profit but at the same time address the issues of equity and inequality that has traditionally plagued African, Caribbean and Pacific countries,” said Prime Minister Holness.

In that regard, Prime Minister Holness stated that with efficient management of businesses, reducing corruption and integrating the poor in the planning process, the ACP countries can lead in the Fourth Industrial Revolution.

Prime Minister Holness also noted that Jamaica continues to perform in many areas. He highlighted that Jamaica has the number one performing stock exchange in the world and is 6th in the world in starting a new business. In that regard, he invited Kenyan investors to invest in Jamaica.

“We have had for the last three years the number one performing stock market in the world. It shows you the level and speed and intensity of business in Jamaica. So, there is a great opportunity for investors here in Kenya and the wider African continent to look to Jamaica for investment opportunities and we welcome you,” said Prime Minister Holness.

During his visit to the capital Nairobi, Prime Minister Holness participated in the General Debate, delivering his address under the theme “A Transformed ACP: Committed to Multilateralism”.

Prime Minister Holness also delivered the vote of thanks at the 9th Summit of the ACP Heads of State and participated in several other activities including meeting with the members of the Jamaican Diaspora.

More in this category: « Murder Most Foul - Four killed, five injured in Kitson Town Klansman murderers who beheaded mother and daughter all get life sentences »