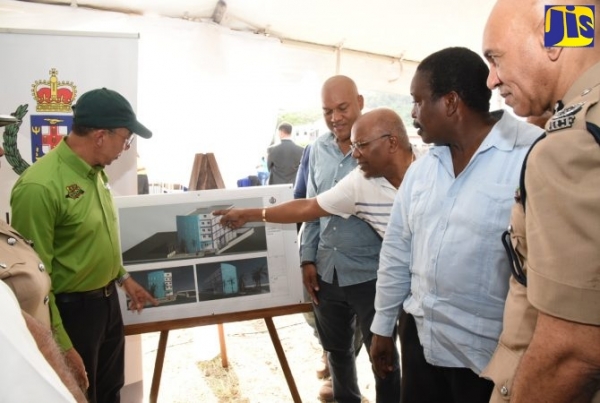 The multi-million four-storey facility will be built by the National Housing Trust (NHT) on land along Main Street in the town, and is slated for completion in 2023.

It will replace the previous station which was damaged by fire several years, resulting in police officers assigned to that post having to be housed at several locations.

National Security Minister, Hon. Dr. Horace Chang, who was among the officials participating in the groundbreaking ceremony, said the Government is focused on improving the work environment at police stations islandwide.

“The Government’s commitment to improving the working conditions of the police force is a long-standing one. It is a policy decision and a commitment that this Administration took on very early. We are committing the kind of funding that will provide the basic resources they need to work,” he said

Senior General Manager for Construction and Development at the NHT, Donald Moore, said the new 28,000 square feet facility will house the operations of the Jamaica Constabulary Force’s (JCF) St. Mary Divisional Headquarters as well as living quarters and a cell block.

Chairman of the St. Mary Municipal Corporation and Mayor of Port Maria, Councillor Richard Creary, welcomed the development, noting that “it is a very modern structure that will help to change the landscape of Port Maria”.

He said the new building forms part of the town’s transformation, citing other government-led projects underway.

These, the Mayor pointed out, include the new $200 million fire station, and a new two-storey market, while pointing out that the Claude Stewart Park was recently renovated.

Meanwhile, Detective Constable Tameka Watson, who is assigned to the Port Maria Police Station, said she is looking forward to the new building’s completion within the next three years.

“I am excited about the new station because over the years, we have been in and out of buildings here in St. Mary. So I am excited that we will soon have our own,” she said.

St. Mary resident, Robert Grey said the citizens of Port Maria and the wider parish have long yearned for a new station.

“Because [the police have had to] keep moving from one place to the other; [so] it’s good that a new building will go up for them,” he said.

Another resident, Christopher Jopp, who was overjoyed said, “I feel good… it’s a good thing”.

More in this category: « Teacher arrested after pretending to be a cop Normalcy Has Returned To Eastern Kingston Communities Under SOE »