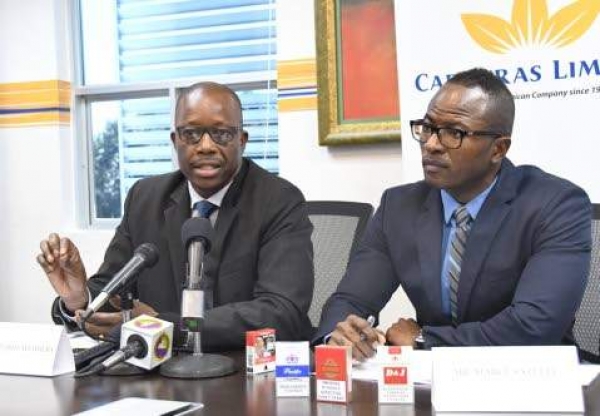 Menthol smokers will soon be lighting up with increased gusto as Carreras Limited will launch a menthol cigarette encased in a capsule that allows smokers to switch to a citrus ­flavour mid-smoke.

It will contain a double-capsule which when tapped or clicked releases flavours or adds “freshness” for a more pleasurable puff.

“We have so far received generally positive feedback from our consumers on our revamped brand Matterhorn. The brand now features a new pack design and a white filter with an added capsule technology to increase freshness. We also introduced Matterhorn Double Click, a new variant with two capsules; one for freshness and one for flavour,” managing director Marcus Steele told Jamaica Times.

The introduction of the revamped Matterhorn will take place in two phases.

“Customers and consumers in the Eastern side of the island have been introduced to the new Matterhorn since July 15,” Steele said.

Carreras first added capsule cigarettes, or click cigarettes, to its product line-up in 2013. The double-click product represents an upgrade of the capsules, which allows for two flavours in one cigarette.

“We anticipated a positive reception of the new Matterhorn, given the added technology, sleek new look of the brand and all told, the value and enhanced experience for our adult consumers, all at the same price,” Steele said.

The launch of the new Matterhorn Core and Double Capsule variant in the Western and Central regions of the island is planned for September.

In the meantime, Carreras Limited delivered a “smoking” first quarter of the 2019/2020 financial year, as the company earned operating revenue of 3.48 billion and delivered net profit for the period of $923.3 million.

“These results show increases in revenues and profits of 10 and 12 per cent respectively, compared to the corresponding period last year,” Steele said.

“The 12% increase in profits and earnings per share for the June 2019 quarter compared to the corresponding period lastyear, is due to the continuation of a positive volume trend commencing in previous months as well as the benefits being derived from the roll-out of our new distribution footprint,” he added.

“Whilst this quarter showed some recovery of our volumes, the illegal cigarette trade remains as a resilient competitor to our business and the legal tobacco industry all told.,” Steele said.

“This is why Carreras has been on record for many years calling for the Government’s implementation of a sustainable excise policy in recognition of the direct link between frequent increases in tobacco excise and the resulting increase in the demand for cheap illegal cigarettes due to affordability issues as the pricing gap between legal and illegal cigarettes widens,” he said.

“This link was most clearly evidenced by the decline in legal volumes and a corresponding increase in the incidence of illegal cigarettes following the significant $3 increase in the Special Consumption Tax (SCT) on cigarettes imposed by the Government in March 2017. A sustainable excise policy is therefore critical to appropriately manage the level and timing of excise increases,” Steele said.

Carreras also maintains that measures must also be put in place to strengthen the island’s border protection and port monitoring mechanisms to stem the inflow of the illegal products into our market.

“The Government loses over $2.5 billion dollars annually from this inflow of illegal cigarettes, as the reality is such that once the illegal products enter the domestic market, it is much more difficult to locate and contain. We also continue to highlight the fact that the illicit trade not only poses a challenge to the Government’s tax collection efforts, but also challenges the Government’s efforts to regulate the product, such as preventing access to minors,” Steele said.

The company has a positive outlook on the future business prospects.

“Our message to shareholders is that we remain very positive about the outlook for the Company and the business in general. We will ensure that we remain relevant in the marketplace and reaffirm our commitment to be the best at satisfying consumer moments.  In so doing, we are confident that we have a sustainable business that will continue to deliver profits and returns to shareholders,” Steele said

More in this category: « HoneyBun Racls Up Sweet Profits For 3rd Quarter KLE REPORTS NET LOSS FOR FIRST HALF OF YEAR »