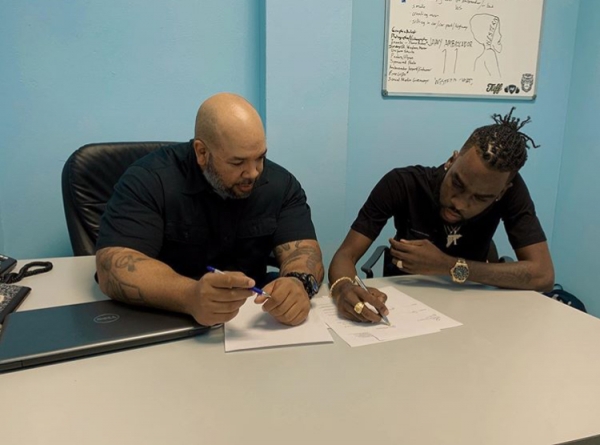 Dancehall producer Jahvy, riding a wave of recent dancehall hits, has inked a brand ambassador contract with apparel company Western Sports.
The deal was signed on October 30th and it is a move that augurs well for the dancehall industry. Jahvy, one of the hottest young producers in dancehall, is looking forward to the partnership.
"The signing is a reflection that the image of dancehall in the eyes of Corporate Jamaica is improving as people tend to have dancehall as gritty and violent at times so connecting with Corporate Jamaica on a venture like this is huge for the genre. It just shows that what we are doing is being recognized on a larger scale, and for me especially being a music producer, this is  a huge deal," the producer whose real name is Jahvel Morrison, said.

He hopes that the partnership will be mutually beneficial to all the parties involved.
"Our most immediate collaboration with be for the coming holiday season and I am sure it will be a success," he said.

The music producer is known for such hits as Alkaline's diss song, 'Mirage' which generated 10 million views, and 'Elite Only' which racked up  2.8 million views since its recent release over a month ago. He also scored with
Jahmiel's 'Winning'.
Read 3173 times
Tweet
Published in Entertainment

More in this category: « Tessanne and Brandon Tie The Knot US-based label shells out big bucks for Iyara's 'Rich and Wealthy' video »