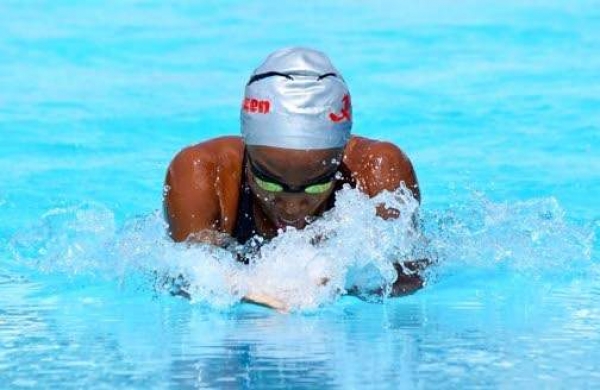 In an early season competition, which was not a target meet for most swimmers, Alvaranga of Kaizen Swim Club established herself as the fastest-ever 13-14 female swimmer for the CARIFTA region when she blazed her way to a 26.34 seconds clocking in the 50-m Freestyle at the Dean Martin Memorial 'AB' Swim Meet (LCM) at the end of October.

The record also lowered the local National Age Group Record previously held by Emily MacDonald, a 2019 PanAm B finalist in the same event where she placed 18th. Alvaranga swam 26.76 at CARIFTA earlier in the year (April) to mine gold and would have also won the 15-17year-old girls event with her time at the same meet.

Alvaranga dubbed the “Iron Lady” of Jamaican Age- Group Swimming delivered a textbook race from start to finish. She was quick off the blocks delivering her signature underwater swim surfacing at 14m and powered her way to the opposite wall taking only two breathes to cover the one lap event.

“I am pleased with the win and the record, as I was just executing the technique work we've been doing in training and it paid off,” said Alvaranga.

“I am surprised that I have gone so fast so early in the season, but now I have set an early target for myself and this will motivate me to continue to do even better as the season progresses,” she continued.

The Jamaican senior record for the event is 25.47 held by Alia Atkinson and the Olympic B Standard 25.51 seconds. Alvaranga is now within a second of the Olympic standard and may be eyeing a place at the Tokyo 2020 Olympic Games.

Alvaranga was featured in the 2017 RJR Sports Foundation Magazine as “The Next Vanguard” of young athletes being produced in Jamaica.

At both championships Alvaranga set regional records in the 50-m Butterfly and has not looked back since.

The Immaculate Conception High school student will next be in action at the Walter Lowi Swim Meet on November 16th at the National Aquatic Centre in Kingston, Jamaica.