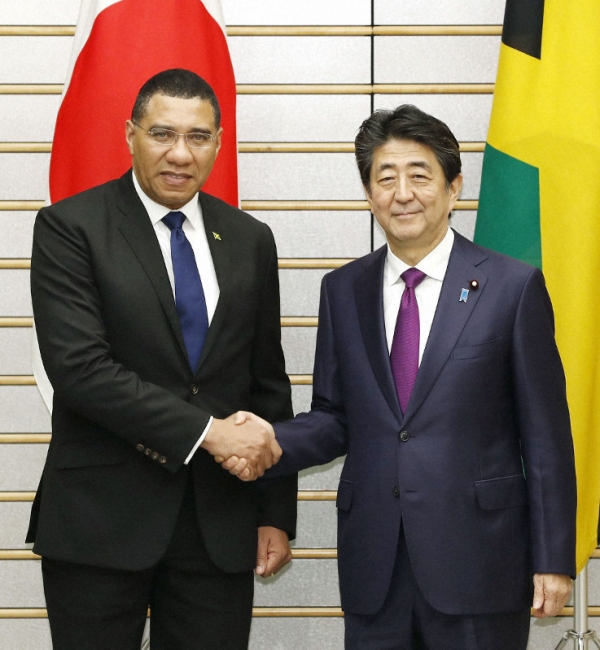 While speaking at a Joint Press Conference in Tokyo with the Prime Minister of Japan, Prime Minister Holness stated that these vessels will significantly enhance Jamaica’s maritime security and disaster response capabilities.

“As another demonstration of generosity, Japan will provide Jamaica with maritime patrol vessels. This offer which was finalized today with the signing of an exchange of notes will significantly enhance Jamaica’s maritime security and disaster response capabilities,” said Prime Minister Holness.

In the meantime, Prime Minister Holness also signed a double taxation convention between Jamaica and Japan to encourage trade and investment between the two countries.

During their bilateral discussion which took place ahead of the press conference, Prime Minister Holness and Prime Minister Abe discussed the scope of Jamaica-Japan relations and shared visions to advance engagements for mutual benefit.

“For over five decades, Japan has been a major partner and genuine friend to Jamaica. Japan has consistently demonstrated its friendship to Jamaica in numerous ways including through technical and economic programmes and volunteer missions in diverse areas. We are deeply grateful for these contributions to our national development efforts,” said Prime Minister Holness.

Prime Minister Holness acknowledged the strong support that Japan has been providing for Jamaica and other Small Island Developing States of the Caribbean region, to develop climate-resilient communities, adaptations strategies, and technologies.