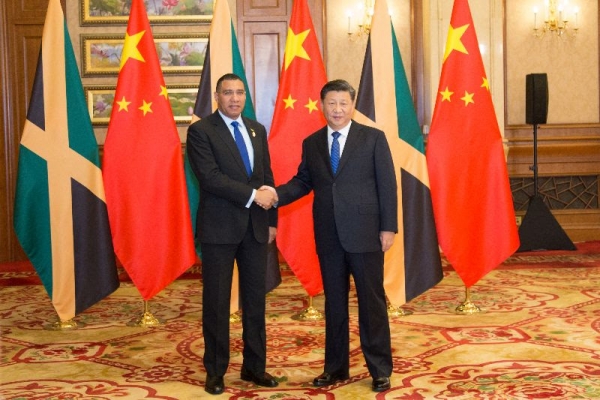 Prime Minister Holness who is on an official working visit, spoke on a number of areas of cooperation between the two countries.

The Prime Minister expressed his gratitude for China’s longstanding strong commitment and support for Jamaica’s economic growth and development.

The Prime Minister told President Xi that the aim of his trip is to strengthen the strategic relations between both countries.

In that regard, Prime Minister Holness noted that China has been impactful in cooperation initiatives with Jamaica particularly in the areas of infrastructure development, trade and investment.

The Prime Minister also said further investments are being sought as Jamaica is positioning itself for Special Economic Zones and port development, under the Global Logistics Hub Initiative which is an essential component of the Belt and Road Initiative.

According to Prime Minister Holness, there are opportunities for even greater growth in these areas between the two countries and there is scope for further cooperation in other areas such as sport and education, culture and tourism.

Alongside the Prime Minister’s official working visit to China, a team from JAMPRO is attending the China International Import Exposition (CIIE), with a display of Jamaican products.

For his part, President Xi mentioned his visit to Jamaica in 2009 and he highlighted his visit to Blue Mountain and the opening of the Confucius Centre at UWI Mona. He spoke of the shared interest in people centered development focus on equity and improvement of the conditions of our peoples.

Prime Minister Holness noted that he will also have more in depth discussions with Premier Li Keqiang when he travels to Beijing later this week.

In the meantime, Prime Minister Holness has also met with the Mayor of Shanghai Ying Yong and toured the Yangshan Phase IV Automated Terminal, which is the world's largest automated port terminal.

More in this category: « Another Gun Murder in St Andrew Would-be robber disarmed, firearm handed over to cops »